The Voyage of the Voice: Jeff Charles’s Battle Against Cancer 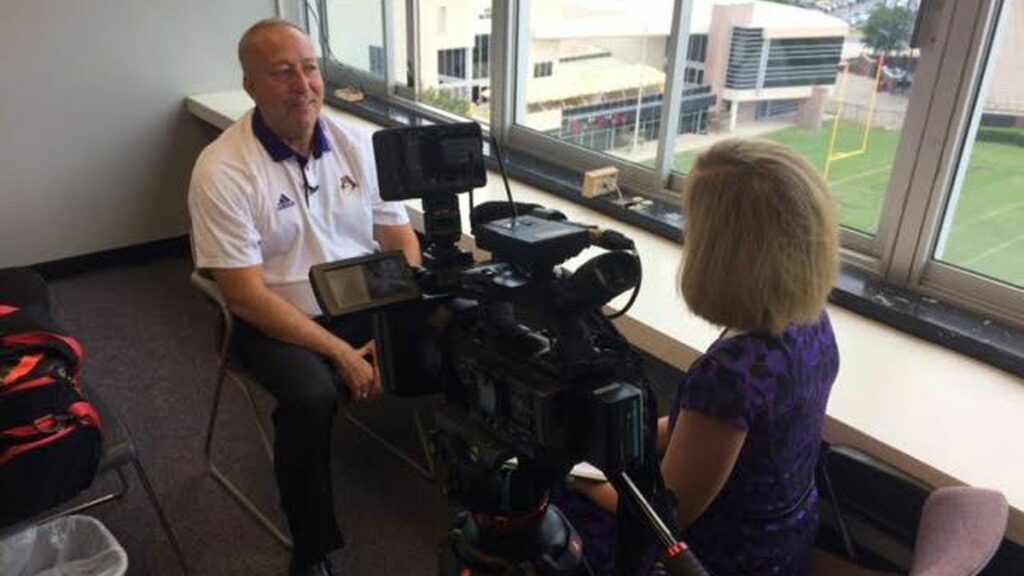 The Voyage of the Voice: Jeff Charles’s Battle Against Cancer

Most ECU Pirate fans know that Jeff Charles, the longtime announcer for the ECU Pirates battled cancer. What you may not know is that it almost killed him.

“I’m very fortunate I got through that period when I was deathly sick,” Charles said. “I was at deaths’s door. There is no question about that.”

In December 2012, Charles was diagnosed with colon cancer and had three surgeries in nine days. Then he developed a near deadly infection. He survived, but the recovery was grueling. He had to sleep in a chair for four months; the three incisions in his stomach meant he could not lay flat. He also had to wear an uncomfortable wound vac for four months. Charles underwent 612 hours of chemotherapy in a six-month period.

“The Voice” got back to work and was in remission. He didn’t know his battle was not over.

“I was naive enough to think that I had beaten cancer,” Charles said.

Then tumors appeared again, this time, in his lung. In March of 2015, a man who’s made his living as “The Voice” ended up losing part of that lung on the operating table. Charles said he was surprised to wake from surgery and be told part of his lung had to be removed. He was not expecting that to happen.

Soon after, a conversation with his doctor changed everything.

“I’ve already been through six surgeries, all the chemo, everthing that I’ve been through, and now here the cancer comes back again, where do you think I am? He says, ‘Well, you’ll probably just continue to get more tumors.’ And a lightbulb went on in my head. And I said, ‘You know, there’s got to be a different way to attack this animal. I’m not just going to sit here and be a statistic like I’ve seen so many poor people over the years.’ “

Charles’s search for that different way led to mistletoe. The plant known for Christmas kisses has been used in Europe to treat cancer for about a century. He traveled to Durango, Colorado to the Namaste Health Center, one of a few dozens of places in the entire country where they treat cancer patients with mistletoe extract, shipped in from Germany, by way of Canada.

Mistletoe is administered in the same way chemotherapy is–intravenously.

“Mistletoe is mianly designed to boost the body’s own immune function,” explains Dr. Stacy Mulkey, one of the doctors at the Namaste Health Center who treated Charles. “There are several proposed mechanisms for this, but one of the most studied is the boost in natural killer cell function. These are a specific type of white blood cells that will basically kill off anything that looks weird, whether it’s a bacteria, whether it’s a virus, whether it’s a cancer cell.”

Charles spent three weeks in Colorado and continues his mistletoe therapy through injections three times a week at home.

“I feel absolutely terrific,” Charles says. “I’ve really never felt better in my life than I do right now.”

Charles says he frequently asks oncologists if they know about mistletoe, and many he’s come across do not. That’s something Believe Big, a non-profit group, is trying to change. Co-founder Ivelisse Page is working to get the first-ever clincial trial of mistletoe for cancer patients in the U.S. off the ground. The mother of four survived stage four colon cancer and has been cancer-free for eight years.

“Right now, patients are having to go in deep research mode to find mistletoe, and we would just love for it to be at the beginning stages of their cancer, instead of towards the end, or have difficulty finding it,” Page says.

Believe Big has raised nearly $500,000 through a grass roots effort in order to begin a clinical trial at Johns Hopkins, a world-renown research facility. Mistletoe therapy is FDA-approved in the Homeopathic Pharmacopia, but it’s not in mainstream medicine. It’s also not covered by insurance.

“Even though its so much less expensive, it’s still out of reach for some people when it’s an out of pocket expense,” says Dr. Mulkey.

It’s about $200 a month for mistletoe injections at home. The goal for Charles and other patients is to keep cancer from coming back.

“We all have cancer cells in our bodies that our immune system is fighting off, and it doesn’t really develop into a tumor until to many of them escape the immune system and happen to be in one area localized, and then a tumor can grow,” Dr. Mulkey explains.

“Sugar is just so bad for you. It’s horrible for you,” Charles says. “And if you have cancer, and you’re continuing to eat sugar, it just fuels cancer cells in your body. It’s like pouring gas on a fire.”

Charles’s diet consists of a shake full of nutrients daily for breakfast, a salad for lunch, fish for dinner most nights, and broccoli pretty much every day.

“It’s not a whole lot of fun, but what happens is you get used to it, and what really happens is that your stomach shrinks and you realize that you don’t need all the food that you were eating,” Charles said.

He also works out at a level comparable to the college athletes he does play-by-play for. Charles also says it’s important to keep a good attitude and to believe in your ability to get better.

“Because this therapy worked so well, and is working so well, I feel a responsibility and just an obligation to get the word out to as many people as I can about mistletoe therapy and a natural approach to killing cancer,” Charles said.

The man who will always be known as “Voice of the Pirates” now hopes his lasting legacy is helping change the way we fight cancer.