Mistletoe: The holiday plant is making headlines as an alternative cancer treatment 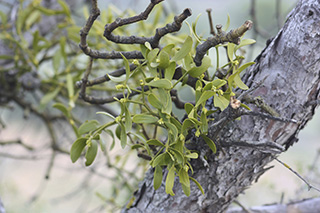 Mistletoe’s big season may have just ended, but its role as an anticancer agent could be just getting started. An oncologist at Johns Hopkins successfully treated a patient who had advanced colon cancer with an extract of the seasonal botanical, sparking interest in the plant’s anticancer properties.

The Smithsonian Institution describes mistletoe as a semiparasitic plant in the order of flowering plants known as Santalales. There are approximately 1,300 species that grow mostly in temperate or tropical areas throughout the world. The two types that are commonly sold during the Christmas season are Phoradendron serotinum, the North American mistletoe, and Viscum album, the European variety.1 Scientists are interested in the latter type for medical applications.

Europe and Asia Although mistletoe is poisonous when ingested, doctors outside the United States have been processing it into an injectable extract to treat patients with cancer for a number of years; and with increasingly positive results.2 In fact, German physicians recently published a paper demonstrating how treatment with mistletoe apparently led to the complete regression of an adenoma in the colon of a 78-year-old man who had refused chemotherapy for a cancer relapse 5 years after surgery.3

United States Physicians in the United States, however, have not been so eager to use the substance, and the National Institutes of Health (NIH) discourages its use outside of clinical trials, despite citing some success. According to the National Center for Complementary and Alternative Medicine (NCCAM) Clearinghouse

“The use of mistletoe to treat cancer has been studied in Europe in more than 30 clinical trials. Although improvements in survival or quality of life have been reported, almost all of the trials had major weaknesses in their design that raise doubts about the findings. For example, many of the studies had a small number of participants or did not have a control group.”4

Studies from Europe have shown benefits for patients with cancer of the colon, breast, pancreas, and even for those with melanoma, but the results of treating other types of cancer with mistletoe have not been so positive. Now, researchers at Johns Hopkins will study mistletoe as a cancer treatment thanks to one patient’s success story, her open-minded oncologist, and his colleague, a physician specializing in alternative and complimentary medicine.

In 2008, Luis Diaz, MD, an associate professor of oncology at the Johns Hopkins School of Medicine, treated Ivelisse Page, a 37-year-old woman with stage IV cancer of the colon. Despite resection of 15 inches of colon and 28 lymph nodes, the cancer progressed to her liver. After a second surgery in which 20% of her liver was removed, Peter Hinderberger, MD, a physician on Page’s health care team, suggested trying mistletoe. A specialist in using complementary therapies, Hinderberger had seen patients respond favorably to injections of the substance. Diaz, also the director of translational medicine at the Ludwig Center for Cancer Genetics and Therapeutics at the Johns Hopkins Kimmel Cancer Center, reviewed the literature on mistletoe studies from Europe, and decided to initiate the therapy. He noted, “… as soon as she went on it, she started feeling better. That’s a universal feature I’ve seen in all patients who get mistletoe.”5

Whether it was the surgery, diet and exercise, or the mistletoe therapy, Page has been free of cancer since her liver surgery.6 She and her husband formed a nonprofit organization, Believe Big, to bring the mistletoe extract from Europe, where it is manufactured, to the United States for clinical trials. They also hope to use their organization to connect cancer patients with doctors who use nonconventional therapies.6 Channing Paller, MD, is principal investigator for the Johns Hopkins research on the use of mistletoe in cancer. An assistant professor of oncology at the School of Medicine, she theorizes that the effectiveness of mistletoe could lie in its apparent ability to boost the immune system and increase patients’ tolerance of traditional chemotherapy. That would mean that patients could receive higher doses of chemotherapy, enhancing the effect but with fewer consequences.

Germany and other countries have approved prescribing mistletoe for palliation, but not for chemotherapy.7 Studies have shown the plant’s derivatives have led to enhanced quality of life, concentration, and mood. Patients on chemotherapy report that they have more energy, and they experience less nausea and discomfort while taking mistletoe. Researchers in the United States are hoping to achieve similar positive effects while proving the extract’s anticancer activity.